New: a calendar that can be sent as a greeting and a gift.

Back cover of calendar. 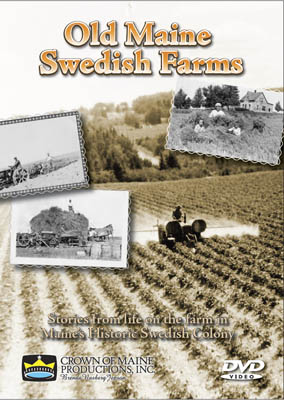 In 1870, Swedish settlers flocked to far northern Maine to farm - creating a unique colony where the Swedish language is still spoken in the 21st century. But the few who speak Swedish are dwindling and the language likely will die out with the thirty or so, mostly older residents, who still speak Swedish today.

“Old Maine’s Swedish Farms,” features six residents of Maine’s Swedish Colony recounting their stories in Swedish of growing up on farms in the area while they are left to tell their tales.

From the April Fool’s Day jokes they played to the sadness they express over the disappearance of their farms, this film captures the lives of the Colony’s Swedish speakers during this fascinating chapter of Maine history. Interviews areconducted in Swedish by Scandinavian scholar, Dan Olson. Subtitles for the interviews are provided in English, while the beauty of the numerous dialects spoken by the last of the Swedish speakers are featured on the sound track.

A video clip from Old Maine Swdeish Farms featuring our own Jerry Nelson, one of the last Swedish speakers in the Colony: