A Year to Remember  DVD 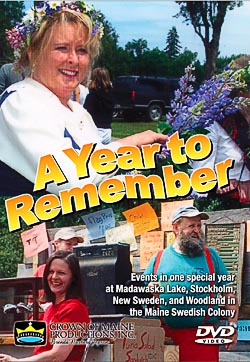 Once in a while, so many good things happen in one year that we come to think of it as a year to remember. “A Year To Remember” captures an unforgettable year for Madawaska Lake, Stockholm, New Sweden and Woodland. The year begins with the first open season for ice fishing at the lake, and moves on to a housewarming party at Stan’s, where guests join in for a sing-a-long with “You Are My Sunshine.” During Midsommar, a Swedish nightingale, Birgitta Anderson Whited delights the crowds with her incomparable voice, and at Stockholm’s 125th Parade floats of all shapes and sizes - including a Knockout’42 replica hunting camp, provide one-of-a kind entertainment for the crowds. “Settling Stockholm,” a pageant, reminds the audience of how this resilient small town came to be. A visit to Stockholm would not be complete without a visit to legendary “Camp Knockout” - another scene from the show, and an interview with Mike Sandstrom reveals how the camp really got its name. Also featured is a hunter’s breakfast in the Sportsman’s Lodge at Axle Siding where Herbie Ketch has been cooking breakfast for decades. Re-live the fun and excitement of this special year with this twenty-four minute DVD. Music on the soundtrack was provided by “The Swedish Meatballs.”

A video sample from Year to Remember: 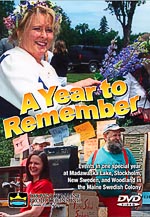